Join Australia's most sought out political commentator Peta Credlin as she offers her razor sharp political analysis each weeknight.

Get up to date with the latest news out of the AFL, along with nightly big name guests and agenda setting opinion.

Sky News on WIN will continue on channel 83 until 9Life commences on that channel on August 1. TVSN on channel 84 and GOLD on channel 85 continue without change.

What will the channel numbers be on the WIN Network from the 1 July?

The WIN Network’s channels in southern NSW, Tasmania and regional areas of Victoria and Queensland be as below: 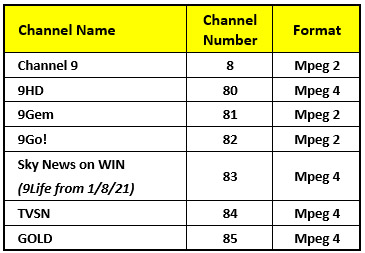 What programs and shows will now be shown on WIN?

There is an exciting new range of shows on offer from the 9Network including:

Australian Ninja Warrior, Married at First Sight, Beauty and the Geek, The Block, Travel Guides, A Current Affair and NRL.

Are there new channel numbers?

WIN’s channel numbers will remain the same, only the programmes will change. WIN will now be broadcasting programs from the 9Network with channel 8 & 80 showing Channel 9 programmes, channel 81 showing 9Gem programmes and channel 82 showing 9Go! programmes.

Where is the 9Life channel?

The 9Life channel will commence airing on Sunday 1 August on channel 83.

Do I have to re-tune my TV to view Nine on WIN?

As the channel numbers are staying the same, no televisions or other devices will need a rescan to receive the 9Network programs. However, some televisions and devices may not automatically accept the new channel names.

Why won’t my television receive some channels?

If you are unable to receive and view some channels, it may be because you have an older television that does not receive the newer Mpeg 4 format channels.

For about 7 to 8 years, all television manufacturers have included Mpeg 2 and Mpeg 4 compatibility while at the same time, all new channels broadcast by Free to Air television networks have been in the Mpeg 4 format, rather than the older original Mpeg 2 format.

If you wish to receive these additional channels, you will need to either purchase a new television or a Set Top Box (cheaper option).


What time is WIN News broadcast?

WIN News will now be broadcast at 5.30pm each weeknight on channel 8 in SD and on Channel 80 in HD. WIN News has always been an important and consistent part of WIN’s commitment to regional Australia.

What about the National News, what time is this broadcast?

Nine’s flagship “9News” bulletin will be shown at 6pm, straight after WIN News on channel 8 & 80.

What happens to programs I have set to record on my DVR or using the ‘series link’ function?

If you are using your DVR to record programmes, you will need to change the record settings and possibly do a rescan to update your television with the channel changes that occur on July 1.  Note that any existing recordings you have in your library will not be affected.

Will my TV guide on my TV look different?

The only difference will be that WIN channels on your TV guide will now show 9, 9HD 9Gem and 9Go! programs. 9Life will commence on the 1 August.

Will programs be broadcast in HD?

Yes, if you have a HD TV (Mpeg 4 capable) you will still receive programs in HD (high definition) on channel 80 (9HD).

Note that the programs and commercials on 9 (in standard definition) on channel 8 and 9HD on channel 80 are exactly the same, but if your television can receive channel 80, it is suggested that you watch this channel as it will have a clearer and more detailed high-definition picture.

Will I continue to get TVSN?

You will continue to receive TVSN on Channel 84.

Join the WIN News team for all the latest in news, sport and weather.

Join Nine News for the latest in news and events that affect you in your local city, as well as news from across Australia and the world.

After being fired from her job and dumped by her boyfriend, a cosmetics saleswoman becomes the nanny to the three children of a rich English widower. As time passes, the two fall for each other. Starring Fran Drescher, Charles Shaughnessy and Daniel Davis.

3rd Rock From The Sun

A group of aliens are sent to Earth, disguised as a human family, to experience and report life on the third planet from the sun. Starring John Lithgow, French Stewart, Kristen Johnston and Joseph Gordon-Levitt.

A comedy revolving around a group of teenage friends, their mishaps, and their coming of age, set in 1970s Wisconsin. Starring Topher Grace, Mila Kunis, Laura Prepon and Ashton Kutcher.

A moving documentary series following a seventy-year-old career veterinarian, his marine biologist son and his veterinarian daughter, as they reveal the wild charm of Western Australia's fauna, from the land to the sea.

Fiona Bruce travels across various regions of the United Kingdom, appraising antiques brought in by the local people. You'd be amazed at how much a seemingly inexpensive antique can be worth.

Based on Agatha Christie's short stories and novels, Hercule Poirot is a famous Belgian detective, who always gets embroiled in a mystery, usually along with his faithful sidekick Captain Hastings and/or Scotland Yard chief inspector Japp. 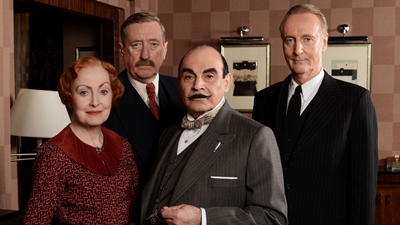